Once upon a time, there were these two knuckleheads known as Hot Shandy who made a living of sorts playing their own brand of comic/Celtic/bluegrass music they called “music & goofy stuff.” For five years they were one of the house bands each winter at Sloppy Joe’s in Key West, and they were one of the more popular acts on the college circuit, playing about a hundred schools a year, some of the bigger festivals like the Walnut Valley Festival (where the National Guitar Championships are held), the Boy Scouts National Jamboree, Harrah’s Casino in Lake Tahoe, and private parties too numerous to mention. They made two albums (that’s right folks, those black vinyl things the size of a small pizza) that faded blissfully into obscurity, and after seven years on the road, they moved on to more respectable means (ha!) of making a living. 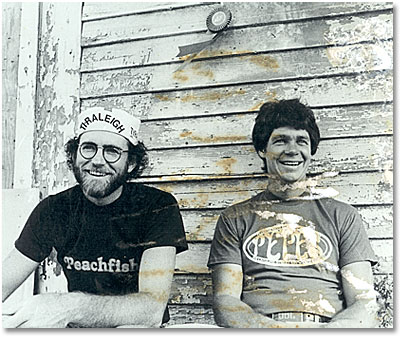 Jim Magill & Rick Bouley, Key West, 1979. This photo was taken in front of a condemned building where the inebriated liked to sleep it off. It was early morning and we were playing Redd Foxx tapes on a boombox to keep us laughing for the photographer, while the hungover souls on the other side of the wall kept pounding on it and yelling at us to shut the hell up. We tried to keep the session short.

We played for lots and lots of college kids at an impressionable time of their lives, and a decade or so later, when the internet and search engines came along, some of them began to track us down (tracked me down, anyway; Rick was always better at keeping “one step ahead,” as they say) and I began to get emails from those wanting to know if our old albums were available on CD. After many a touching tale of loss: “My wife got the record collection in the divorce,” “It melted when I used it as a nacho platter during the Super Bowl,” etc., we were moved to finally get off our humps and have the things digitized.

Our buddy Zan McLeod (the third member of the band for our first year or so) took the original analog master tapes, which were beginning to deteriorate, restored them, digitally remastered them and sent us CDs. The resulting sound quality is as good or better than what we heard on the studio monitors when we recorded the albums. Rick and I both feel that the CDs sound better than the albums ever did.

This was our first album and featured six of Jim’s songs, two Irish instrumental sets, a John Prine classic, a tune by our friends the Red Clay Ramblers, our infamous kazoo rendition of the 2001: A Space Odyssey theme, and “Bill Bill,” a tune about a fat boy and his hog for which we became pretty well-known. In addition to Rick on guitar & vocals, and Jim on mandolin, guitar and vocals, the album features our buddy Mike Cross on fiddle, Red Clay Rambler Jack Herrick on whistle, the great Celtic band, Touchstone, with their original lineup of Tríona Ní Domhnaill, Zan McLeod, Claudine Langille and Mark Roberts, and a special cameo by mandolinist extraordinaire, Tony Williamson.

Our second album featured three of Jim’s songs, several songs with a Texas flavor including Larry Mangum’s title cut, two Celtic tracks, another Red Clay Ramblers tune, a cajun/Celtic mash-up on a Tim Henderson tune, more silliness, and, through the magic of multi-tracking, a friggin’ HUGE back-up choir on Texas singer Bobby Bridger’s “Heal in the Wisdom,” a re-write of the old hymn, “Farther Along”. Rick sang and played guitar while Jim sang and added mandolin, guitar, tinwhistle and dulcimer, and we were helped out once again by Zan McLeod, Red Clay Ramblers Tommy Thompson and Jim Watson, Touchstone’s Mark Roberts, and our friends Billy Covington on keyboards, Joel Keel on bass, Jon Larson on percussion, Don Mercz on jazz guitar and vocals by Beth Harlow, the future Beth Magill. That’s Jim on the cover, age 10, dancing with his sister, Sally.

If, after reading this, you’re at all interested in one of these relics, then here’s the deal:

Both CDs – $30
(postage included anywhere in the continental U.S.*)

* If you need shipping outside the continental U.S., email me for a rate.

Checks or money orders only, please, made out to “Jim Magill“
Please include in the check’s ‘memo’ field how many of which CDs you are ordering. 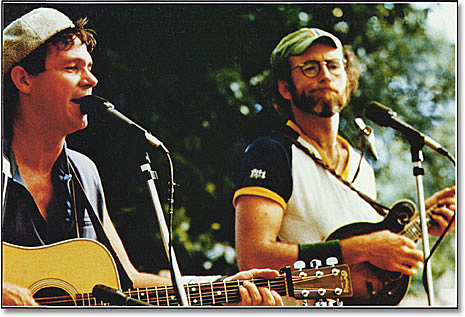